Tigress are a British rock band from Chelmsford, England. Formed in September 2015, the band consists of vocalist Katy Jackson, guitarists Tom Harrison and Sean Bishop, bassist Jack Divey and drummer Josh Coombes. The band are currently signed to LAB Records where they released their debut EP Human on 13 November 2015, follow up EP Like It Is on 12 May 2017 and 2018 EP Who Cares. All three releases were met with much acclaim across a number of major and independent music publications.

TIGRESS released their debut EP Human on 13 November 2015. It was co-produced by You Me at Six guitarist Max Helyer and John Mitchell at Outhouse Studios in Reading and mixed by Romesh Dodangoda. The band’s first show was performing at the Vans Warped Tour UK kick-off party at the Brooklyn Bowl in London on 14 September 2015. This was followed by a UK tour with Metro Station and a slot at the Vans Warped Tour UK at Alexandra Palace, London on 18 October 2015.

In support of the Human EP release, 2016 saw TIGRESS go out on a short headline tour in June which included a sold out show in the band’s hometown of Chelmsford. The band also played with Alvarez Kings and Fort Hope. In late 2016, the band went into Middle Farm Studios to record their Like It Is EP with Peter Miles.

In March 2017 the band went on a UK and mainland Europe tour with Counterfeit. They were joined by Decade in mainland Europe and Faux in the UK. Prior to the Counterfeit support tour, TIGRESS played Seaway’s headline London show in February. They were joined by The Gospel Youth and WSTR. On 12 May 2017, the band released the Like It Is EP. This was followed by a set at The Great Escape Festival in Brighton, performing with Green Day at British Summer Time in Hyde Park and a tour of Russia and Eastern Europe with Billy Talent. In October 2017, TIGRESS showcased at BBC Music Introducing hosts Amplify, supported The One Hundred in London and performed at 2Q Festival in Lincoln.

February 2018 saw TIGRESS open for Japan’s Man With A Mission in London, followed by an appearance at Spring Break Festival in Poland on the 21st April. The band supported InMe in May, which was followed by the release of their third EP Who Cares. June saw the band perform on the Avalanche Stage at Download Festival. Towards the end of the year the band opened for The Xcerts and Skindred. 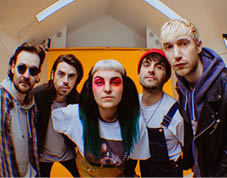